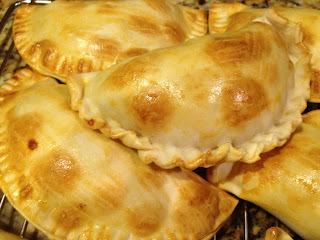 Empanadas. For some reason before taking an empanada making class I had never even thought about making them. They seemed tricky, like you had to have some special dough making skills passed down from your Latin American great grandmother. Of course, those skills wouldn't hurt to have, but for the gringos out there like me, I found out you aren't too far away from being able to make the fresh baked pillowy pockets. You can make them baked or fried and fill them with whatever your heart desires. I think this might just be one of those most versatile foods ever! Vegetarian? Fill them up with black beans and cheese or some fajita veggies. Have kids? Stuff them with cooked hamburger meat and cheese. (I know that's not traditional, but what kid and parent doesn't love their own hand held self contained dinner?) Below are 3 more ideas to get you started. The first 2 are from our class, the last one we made up. Have any filling ideas to share?

Who wouldn't get excited about an unlimited wine, cheese and chocolate tasting and the bonus of learning to make empanadas!? Well, last Saturday that was our M.O. I purchased gift certificates from Living Social for the deal and off to Miami we went. Overall it was fun to get out of the house (remember I work from home, so getting out is always fun), have some wine, meet a few people and learn to make something I would have never even attempted on my own.  There were a few things I think Living Social could have improved on though. Read more to see my review of the event. In a future post I will share my new empanada skills so you can make empanadas yourself!

Win a Trip for Two to Costa Rica

Costa Rica's tourism board is holding a "Million Dollar Gift of Happiness" promotion. You can enter every day for your chance to win a themed vacation (think adventure or romance) to Costa Rica. To enter just visit Costa Rica's Facebook page. What type of adventure did you pick? Who will you take if you win? Good luck everyone!
Posted by Joy at 8:53 AM No comments: 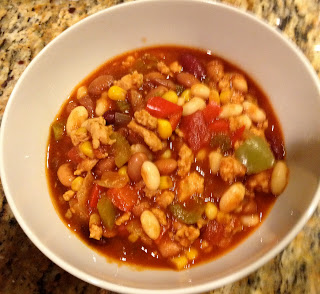 It was a washout weekend here in Boca and the rain still hasn't stopped. Other than an empanda making class I went to in Miami (more on that in a later post) I was stuck inside and ended up doing a ton of cooking. I made pizza dough to freeze for easy weeknight meals, key lime cookies with a white chocolate glaze to use up some buttermilk I had in the fridge, banana bread and last but not least turkey chili. Chili just seems like the perfect match for a rainy day when you have football on the tube. I hope you enjoy! 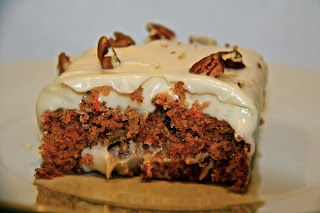 I LOVE carrot cake. Well, let's be honest, I  love any cake, or anything sweet for that matter. But this carrot cake is probably one of the best I have ever had. And the frosting, WOW! Originally I made it exactly as described in the recipe, but I think this version is better. Hope you enjoy. And remember, it has both fruit and vegetables in it so you don't have to feel guilty eating it. Right?

This Friday October 14th there will be a Food Truck Pile Up at JM Lexus Margate . Ron and I went to the last one and had a great time sampling all of the different food. The people watching wasn't bad either as many people, young and old, hit the dance 'floor'. If you are in the area you should definetly try it out. One tip, BYO beverage. Last time we spent a fortune on bottled water and drinks. (Legal disclaimer) I am not advocating brown bagging your beer or doing anything naughty, but I doubt anyone would notice if you had a nalgene full of your drink of choice.

What do you think of food trucks? Love or Hate? Any issue with eating food from the road side?

The second part of our European adventure was spent in Munich for Oktoberfest. Some fellow beer guzzling fun loving friends of ours from high school (yes we still talk 14 years later) met us there for the party cultural enrichment. Before I get to the beers and food I wanted to share a few things about Oktoberfest that surprised me. First of all Oktoberfest is kid friendly. We saw tons of kids in the beer tents, playing carnival games, riding the rides, etc. They even have family nights where they discount the rides. Second, somehow they keep the bathrooms decently clean. I have been in bars with under 100 people that have bathrooms worse off than a port-o-potty, but somehow the Germans manage to keep the bathrooms used by thousands of beer drinkers clean. Amazing! Third, everyone is a happy drunk. In the US if a drunk guy standing on a bar bench spilled a liter beer on the unfortunate guy below him, I am pretty sure a fight would break out. At Oktoberfest the spiller hugs the spillee and invites him to join his table. We sat and talked with more strangers than I can count. At times we didn't even speak the same language but we were friends by the end of the night. I love happy drunks! :)

As far as beer goes, the Germans mainly still stick by the 'Reinheitsgebot' or German Beer Purity Law, that states beer can only be made with water, barley and hops.  You are not going to find any IPAs or Blueberry Wheat Beers at Oktoberfest. And the food, well it IS exactly what you imagine, Meat and Potatoes. The only green on the plate is usually a sprinkling of parsley over your Knodel (potato dumpling). I hope you enjoy the picture tour!

This was my first attempt at making crab cakes other than heating up the frozen kind and they turned out great. I served them with a remoulade sauce and steamed broccoli. I forgot to take a picture so you will just have to use some imagination. Or you could try out the recipe and send me a picture of your creation. 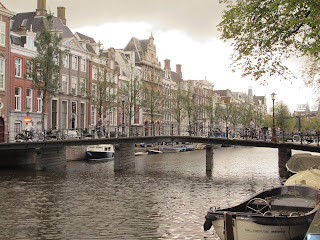 I'm back from my European adventure. Did you guys miss me? Since I have been doing a lot of eating and drinking and not a whole lot of cooking lately, I figured I could share some of what I tried while on vacation.

Welcome to A Pinch of Joy! My main goal is to share with you a few of the things that bring joy to my life; food, drinks and travel. I take a laid-back approach to cooking, measuring in glugs and spoonfuls and changing recipes on the fly. I brew my own beer and fell in love with Whiskey in Ireland but have also been known to drink my share of umbrella drinks and to kick back a few glasses of champagne. I love to travel and have a long list of places I still need to experience. I hope you enjoy my honest approach and will try a few of these things on your own.

Have a blog I should follow or mention here? Send me an email and let me know!

"I always cook with wine. Sometimes I even add it to the food." W.C. Fields

“The world is a book and those who do not travel read only one page.” St. Augustine

“Twenty years from now you will be more disappointed by the things you didn’t do than by the ones you did do. So throw off the bowlines, sail away from the safe harbor. Catch the trade winds in your sails. Explore. Dream. Discover.” Mark Twain

"Beer is proof that God loves us and wants us to be happy. " Benjamin Franklin

“Travel is fatal to prejudice, bigotry, and narrow-mindedness.” Mark Twain